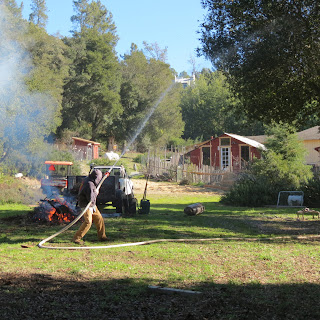 In the summer of 1994 I was a beach lifeguard on Monterey Bay, for the city of Santa Cruz. It was my ninth season. The abdominal pain began in July. Self diagnosing the pain as a pulled oblique muscle, I tried ice, which was not much help.

My girlfriend Dori was not racing that day so she drove our white Toyota truck filled with lifeguards, both City and State, to Aptos in the dark. What an adventure it was.


The pain in my abdomen was starting to exceed my body’s ability to deny it, but not my mind’s… It hurt to run but swimming felt good. The salty ocean water supported me in a way that reduced the pain.

Dori was our race official, since she would not be competing. She was also our time keeper. The Aquaman is more about staying in shape and comradery than competition, although someone always has the best time (pun intended). Lifeguards like a good challenge. We swam as a group around the Cement Boat, by the dawn’s early light. At the bow of the ship, the Seals and Birds cavorted, as did the lifeguards. We were having the time of our lives! 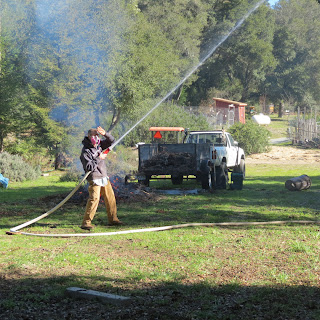 It was starting to sink in that something was quite wrong in my lower abdominal region. During the first run, along New Brighton Beach, and then below El Salto to Capitola, the tide was as low as it gets, and my lower gut was hurting. A lot. I took it easy. I really wanted keep going, and Dori had left with the truck to intercept us at the harbor. My Lieutenant and friend Mike Slezak, stayed with me for the rest of the race. It was slow going. He could have smoked me to the Capitola Pier.

As we swam around that wharf, I felt a bit better, so I extended my swim north a little farther than I needed to, toward Sharks and Privates. That way I would have less running to do. Mike was waiting for me when I got out of the water.

The runs in the Aquaman are a bit of a scramble. It’s designed that way. So are lifeguards. We like to scramble. That’s the point. Underfoot, the bottom was sometimes sand and others rocky shoreline. I have always been a good crab crawler, so running under Opal Cliffs past The Wild Hook and Pleasure Point to Rockview really was a pleasure. We took the high route to Windansea, jumped in and swam to the beach and then along the shore to Sunny Cove. We weren’t too far behind the pack, but the leaders were long gone. I was still hurting. Mike was hanging back to pace me. I wasn’t the best athlete in the race that day, but I may have been the most determined.

Swimming around Blacks Point from Sunny Cove is my favorite part of the race. The isolation of the coastal bluff, the blowholes, and the uniqueness of being there kept me going. I stuck it out. Back on the sand at Blacks beach, we ran to the harbor’s east jetty. That year a few of us swam straight across the harbor channel instead of around. Although against the rules (one of the few), it was a shorter distance, so we went for it. Dori was waiting on the west jetty, and I got a kiss on the fly by, for our efforts.

The sand at Seabright beach is always soft, even at the water line. The beach break really churns it up. Very hard going for me. We high-stepped across the San Lorenzo and we were on Main Beach, City Lifeguard home turf. I didn’t have much left. My run down the beast was slow and labored.

The swim around the Municipal Wharf came next. I hit the drink around Tower 3 in front of the bandstand. The race was concluding, but my workday in the vehicle was just starting. I was a bit behind schedule. Concerned I might be late, I swam as fast as I could. My Australian crawl really resembled a crawl. Not pretty form. I pushed myself around the wharf. I’m sure I was last, but it didn’t matter.

As I made my way to the beach at Cowells, Dori, who is now my wife, was waiting. She was stoked for me, but concerned. I was a few minutes late for my 9:00 work start. In the shower at LGHQ it began to dawn on me that something was really wrong. I wasn’t up for working the vehicle that day, so I traded shifts, and worked HQ.

I iced my abdomen, because I didn’t know what else to do. The denial of something being wrong was wearing thin. In the back of my head a voice kept saying “Something’s wrong. Something’s wrong,” as it had been all morning. So I ignored it. I concentrated on my day’s work.  The day was busy, which helped.

Thanks Mike. Thanks Dori. And whoever covered my shift in the vehicle that day, thank you too. I’m pretty sure it was Britton who relieved me at headquarters when he was done with the break shift. Back then he was the “break master,” which allowed him to continue his career as a firefighter at UCSC, where he still works.

Soon after, once the season ended on Labor Day, I started making plans to go to Baja with my good buddy Bruce. Dori had to stay home to work, which upset her. Then my lungs began to hurt, but only when I breathed, so I went on with our Mexico plans… Are you starting to see a pattern here?

Then came the night sweats. It was time to go to the Doctor, actually past time. Soon after I was diagnosed with Non Hodgkins Lymphoma, Stage 4. Dori proposed to me so her vested employment at UCSC would get me the insurance I needed to be accepted to a clinical trial at Stanford Hospital, where I got a Bone Marrow transplant. But that’s another story.