The Anteater and the Macaw

Happy Holidays from the Ranch!
We've been gathering our smoked turkey, cranberries, and yams. The pie crusts are safely tucked away in the fridge. It will frost tonight. We have much to be thankful for.
It is our anniversary, which we celebrate over the course of two weeks-—from the time we climbed the chipped gray steps of the court house and signed the documents…until we spoke our vows on Wilder Ranch, north of Santa Cruz, led by our friend Kat, with our dog Kiwi in attendance.
This morning we awoke to a message from Chile, from a student of Andrew's father Addison, in 1959 at Yale. It is about the most inspiring reason to put up a new story since his last friend contacted us.
The first story Andrew picked off the pile was this one, The Anteater and the Macaw. Ironically it is a story about love, but not like you would expect.
Dig it.
The Anteater and the Macaw 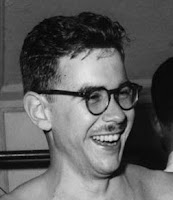 
--oOo--
*The closest word I could find to this, "myrmecophagy," is defined as "feeding on ants or termites."
Andrew strongly suspects this word was the genesis of this story.
Posted by Dori at 8:37 PM