Andrew's father, Addison W. Ward (1930-1965), was a Princeton graduate who became a literature professor. In doing so he found his calling. He was a prolific writer, and taught at Yale and Oberlin University in Ohio. He was a passionate jazz clarinetist, and loved to sail and split wood. And he liked to do things well. He was much loved and is sorely missed.


This is one of his short stories. It is our guess it was written while he was teaching in Paris in the early 50’s, before Andrew was born. 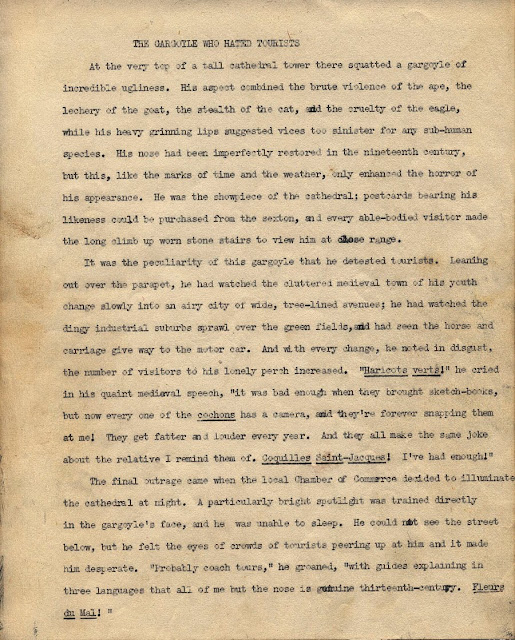 The Gargoyle who Hated Tourists
by Addison Werner Ward 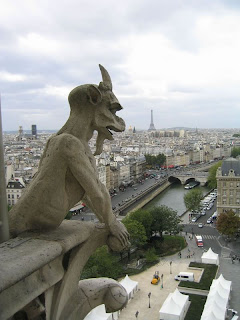 At the very top of a tall cathedral tower there squatted a gargoyle of incredible ugliness. His aspect combined the brute violence of the ape, the lechery of the goat, the stealth of the cat, and the cruelty of the eagle, while his heavy grinning lips suggested vices too sinister for any sub-human species. His nose had been imperfectly restored in the nineteenth century, but this, like the marks of time and the weather, only enhanced the horror of his appearance. He was the showpiece of the cathedral; postcards bearing his likeness could be purchased from the sexton, and every able-bodied visitor made the long climb up worn stone stairs to view him at close range.


It was the peculiarity of this gargoyle that he detested tourists. Leaning out over the parapet, he had watched the cluttered medieval town of his youth change slowly into an airy city of wide, tree-lined avenues; he had watched the dingy industrial suburbs sprawl over the green fields, and had seen the horse and carriage give way to the motor car. And with every change, he noted in disgust, the number of visitors to his lonely perch increased. “Haricots verts!” he cried in his quaint medieval speech, “It was bad enough when they brought sketch-books, but now everyone one of the cochons has a camera, and they’re forever snapping them at me! They get fatter and louder every year. And they all make the same joke about the relative I remind them of. Coquilles Saint Jacques! I’ve had enough!”
The final outrage came when the local Chamber of Commerce decided to illuminate the cathedral at night. A particularly bright spotlight was trained directly in the gargoyle’s face, and he was unable to sleep. He could not see the street below, but he felt the eyes of crowds of tourists peering up at him and it made him desperate. “Probably coach tours,” he groaned, “with guides explaining in three languages that all of me but the nose is genuine thirteenth-century. Fleurs du Mal!”
The façade of the cathedral was being cleaned at this time. The cleaning had begun before the last stones of the apse were in place, and the workmen no sooner finished one of the towers than they moved their scaffolding to the other, so that for seven centuries one or the other of them had been obscured by a criss-crossing of pipes and boards. This year, by a lucky chance, they were working on the gargoyle’s tower, and the scaffolding reached to within three feet of his parapet. One night after the spotlights had finally been extinguished and all the tourists were safely back at their hotels, he climbed cautiously down to the ground. The great square in front of the cathedral was deserted, and for the remaining hours of the night the gargoyle paced the dimly-lighted streets, humming medieval drinking songs to himself, and savoring the pleasures of anonymity.
When morning came and the streets began to fill with people he was surprised and delighted to find that he could pass unnoticed. Out of sheer mischief he stopped a workman, leered fiendishly into his face, and demanded the time in a demonic cackle. The man muttered an answer and hurried by. "Folies Bergères!” exclaimed the gargoyle. “But of course this is a poor quarter of town, inhabited by people of no culture. Near the opera house I would be recognized and apprehended before I had walked two blocks.”
But as the day wore on he grew uneasy. He found a newspaper and read it with mounting indignation, first the headlines, then the inner pages, and finally even the obituaries and sporting results. There was no mention of his disappearance. Was it perhaps a trick to throw him off guard? His efforts to attract attention became frantic; he stopped anyone carrying a camera and asked long, pointless questions about the cathedral; he jumped on the counter of a travel agency, struck his famous pose, and demanded a ticket to the underworld; he leaned conspicuously against travel posters and made weird hooting noises at passers-by.

The results, however, were unexpected. In the course of the afternoon he was mistaken for a famous politician, a black-marketer, an American novelist, and a peanut-vendor. One man asked how his lawsuit was going; another tried to repay a small loan. Near the opera house he was offered the role of the commandant in a new production of Don Giovanni. In a café the waiter greeted him warmly and asked if he wanted his usual aperitif; before he had time to reply a young man wearing a beard introduced himself and demanded, with deferential firmness, that he read the manuscript of a new play. While he was resting in a park a well-dressed woman sat down on the end of the bench; she stared intently at a nearby group of children and said in a toneless voice, “Gaston, Charles knows. We must do something.” The gargoyle excused himself and slouched away.
That night he walked again. It was an uneventful night, though he did have a brief and unsatisfactory conversation with a naked girl he discovered standing coyly in a fountain. Her flesh was a beautiful dark grey color, and he could imagine how cold and hard it would be to the touch. But she laughed a mocking, eighteenth century laugh at his elaborate compliments and called him a relic of an age of prejudice and superstition. Around midnight he had a disturbing thought which made him hurry to the cathedral square. He had remembered the plaster cast they had made ten years before when it was first noticed that his horns were weathering badly and his left talon was cracked. When he arrived he half expected to find his own hideous features staring down at him. But it was all right: his place was empty. Something was different, though. His gaze wandered over the great façade and then, with a shock, he saw. The scaffolding had been moved to the other tower.

At eight the next morning he was waiting outside the entrance of the cathedral tower. The doors had not yet opened, and to pass the time he addressed one of the tourists who were beginning to gather, asking him if the climb were really worth the effort. The man burst into violent motion; his shoulders rippled and quaked, and his hands performed a mating dance. “Divina commedia!” he shouted, “Is it worth the climb! Ah, signore, is worth three climbs! Is of course nice view. But the, how to say, the climax, is the gargoyle! Madre di Puccini, what a beast, what a fiend, what a monster!” His hands fluttered to rest on his cheeks and began to pull the skin tight, transforming his face into a mask of such inhuman malice that the gargoyle instinctively drew back a step.
The doors were finally opened and he made his way up at the end of the group, pausing to exchange a few words about early gothic sculpture with the sexton. At the top of the stairs he stopped and snorted with contempt: the tourists had gathered at the wrong corner of the tower. They were lost in admiration of a mild-looking gargoyle named Polyeucte, a pleasant enough fellow, though his head and shoulders were nineteenth-century, and rather routine nineteenth-century at that. The gargoyle slipped silently to his own perch and waited for them to turn around. It was good to be home, he thought as he peered malevolently over the grey city. Out of the corner of his eye he could see that one of the tourists had come over and was training his camera on him; he scowled more fiercely than ever. There was a pause, then he felt a mild and hesitant hand on his shoulder. “Excuse me, sir,” the man said, “would you mind very much? I’d like to get a shot of the Eiffel Tower from up here. It won’t take a minute.” 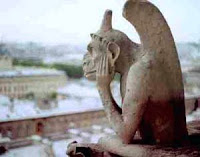