It has been wet and windy here at the ranch. Now that the power is back on, we wanted to post the next in our series of short stories by Andrew and his younger sister Edie's Dad, Addison Ward. 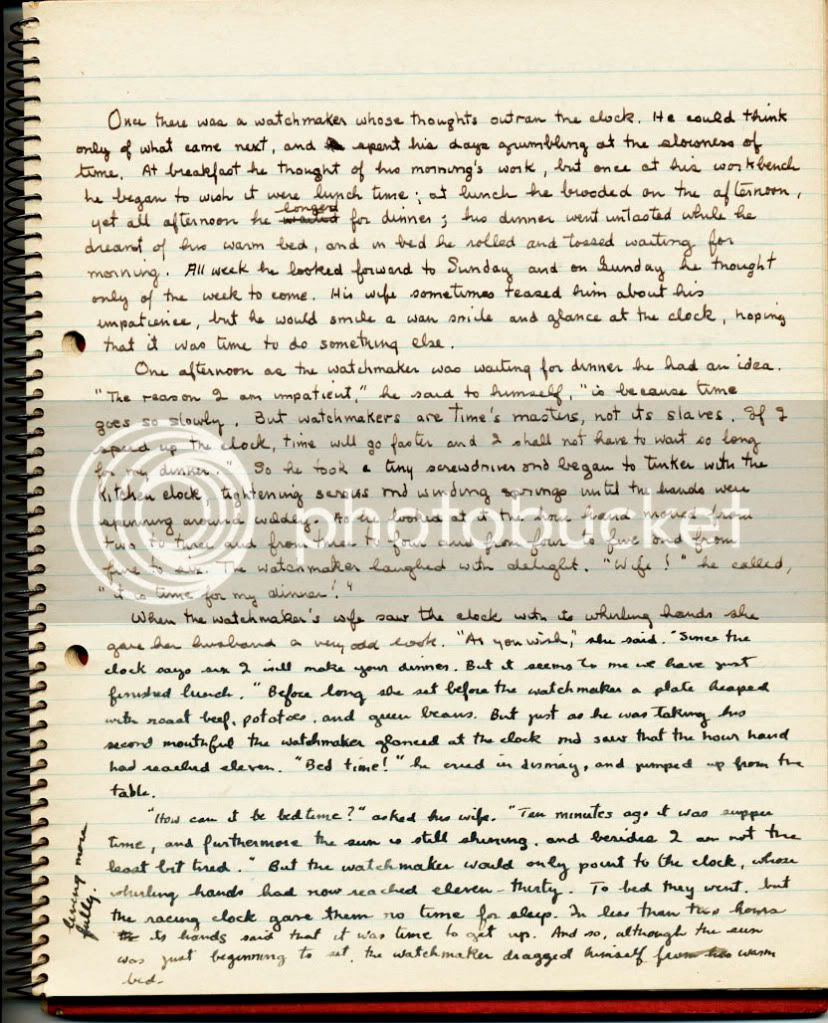 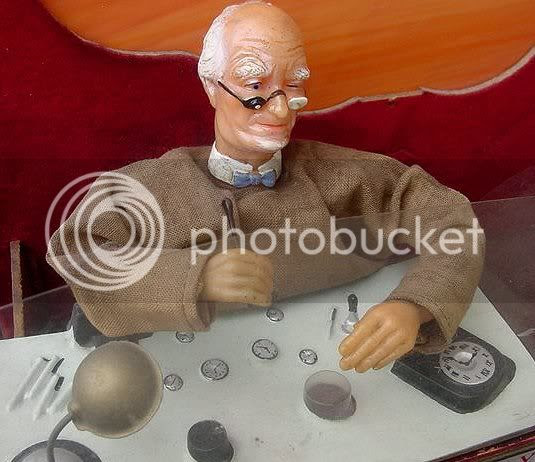 Once there was a watchmaker whose thoughts outran the clock. He could think only of what came next, and spent his days grumbling at the slowness of time. At breakfast he thought of his morning’s work, but once at his workbench he began to wish it were lunch time; at lunch he brooded on the afternoon, yet all afternoon he longed for dinner; his dinner went untasted while he dreamt of his warm bed, and in bed he rolled and tossed waiting for morning. All week he looked forward to Sunday and on Sunday he thought only of the week to come. His wife sometimes teased him about his impatience, but he would smile a wan smile and glance at the clock, hoping that it was time to do something else.
One afternoon as the watchmaker was waiting for dinner he had an idea.
“The reason I am impatient,” he said to himself, “is because time goes so slowly. But watchmakers are time’s masters, not its slaves. If I speed up the clock, time will go faster and I shall not have to wait so long for my dinner.” 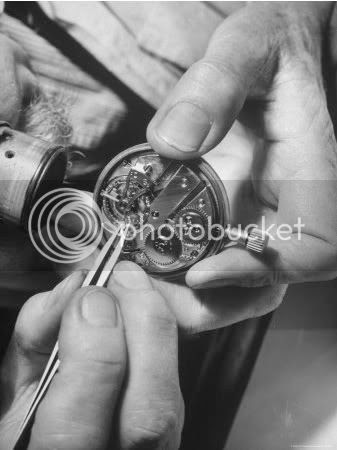 So he took a tiny screwdriver and began to tinker with the kitchen clock, tightening screws and winding springs until the hands were spinning wildly. As he looked at it the hour hand moved from two to three and from three to four and from four to five and from five to six. The watchmaker laughed with delight. “Wife!” he called, “it is time for dinner!”
When the watchmaker’s wife saw the clock with its whirling hands she gave her husband a very odd look. “As you wish,” she said. “Since the clock says six I will make your dinner. But it seems to me we have just finished lunch.” Before long she sat before the watchmaker a plate heaped with roast beef, potatoes, and green beans. But just as he was taking his second mouthful the watchmaker glanced at the clock and saw that the hour hand had reached eleven. “Bed time!” he cried in dismay, and jumped up from the table.
“How can it be bedtime?” asked his wife. “Ten minutes ago it was supper time, and furthermore the sun is still shining, and besides I am not the least bit tired.” But the watchmaker would only point to the clock, whose whirling hands had now reached eleven-thirty. To bed they went, but the racing clock gave them no time for sleep. In less than two hours its hands said that it was time to get up. And so, although the sun was just beginning to set, the watchmaker dragged himself from his warm bed.
This was only the beginning of the watchmaker’s trouble. He gulped down his breakfast in order to get to work on time, but he had hardly arranged his tools before the clock said it was time to stop for lunch. He raced from place to place in a desperate effort to keep up with the whirling hands of the clock, yet hurry as he would he was always late. Before the sun rose again he had been in and out of bed four times, had eaten four breakfasts, four lunches and four dinners and had made eight attempts to get to work. As for his wife, the meals followed each other so closely that she had no time to wash the dishes from one before it was time to begin preparing the next. When she could stand it no longer she complained to her husband.
“I am tired of rushing about because the clock tells me to,” she said. “From now on I shall get up when the sun rises and go to bed soon after the sun sets. I shall eat breakfast when I get up, dinner just before I go to bed, and lunch halfway in between. If you do not wish to have your meals when I do, I shall leave you a big pot of soup to eat whenever you want it.”
After that the watchmaker’s life grew lonely as well as frantic. He saw his wife only at the odd times when their schedules overlapped, and even then he scarcely had time to talk with her. While she worked calmly from sunrise to sunset and slept peacefully from sunset to sunrise, he dashed about, gulping down soup, crawling in and out of bed, starting and stopping work, trying to cram a day’s work into two hours.
To make matters worse he quarreled with his customers, claiming to have worked for “four hours” when they thought he had worked for one.
As time passed the watchmaker grew lonelier and hungrier.
“It was better being impatient,” he thought. “I shall slow the clock down again.” But somehow there was never time. No sooner would he get ready with his screwdriver than a glance at the clock would tell him it was time to drop his tools and run off to do something else. He could no more fix the clock than he could eat or sleep in peace.
One night as he crawled into bed the watchmaker looked at his sleeping wife and burst into tears. “I am growing old four times as fast as everyone else,” he said sadly. “Every day in her life is four days in my life, and every year will be four years. At the end of ten years I shall be forty years older than I am now and my wife will still be a young woman while I am a tired old man.”
Thinking these sad thoughts the watchmaker fell asleep. It was the first real sleep he had had since he speeded up the clock. When his wife awoke soon after sunrise she saw him sleeping and tiptoed quietly out of the bedroom. From time to time she peeped in during the day, and always she found him sleeping. He slept so long that at last the clock ran down and stopped because there was no one to wind it.
At last the watchmaker woke and called his wife. “What time is it?” he asked when she stood beside his bed.
“What time would you like it to be?” his wife asked.
“I am terribly hungry,” said the watchmaker. “I should like it to be supper time.”
“Very well,” said his wife, and going to the kitchen she moved the hands of the clock until it said six. Then she prepared her husband’s favorite dinner: lamb chops, tomatoes and sweet corn.
While the watchmaker was eating his dinner he glanced nervously from time to time at the clock. “Don’t worry,” his wife said, “the clock has stopped and we shall leave it that way. It will be six o’clock until you want it to be later.”
So the watchmaker and his wife talked and ate and drank and talked some more until at last they both were yawning. “Oh dear,” said the watchmaker. “Now I’m tired.”